My husband and I finally celebrated our anniversary Thursday night. Just about a month and a half late. But see, we take turns planning what to do and 2015 was my turn and by early November I still didn’t know what I wanted to do.

And then… and then… my mother-in-law complained on Facebook that 2Cellos would not be visiting Denver on the American leg of their tour. But guess what? They would be coming to Dallas…

I scrambled onto the website and tried to buy tickets. Seats were literally getting gobbled up as I tried to learn the layout of the facility and figure out which tickets we could afford and where we’d want to sit and holler to my husband in the other room about our choices. I finally got the “best” two adjacent seats still available, which ended up being the row above the box seats but all the way over near the front such that we couldn’t see unless we leaned way over or stood up. More on that in a minute.

We paid extra ahead of time for the good parking and got there an hour early. We waited in line to buy souvenirs. I bought a glass of wine. Speaking of the wine, like my sippie cup?

The only way you can take your drink into the show is in one of these costs-two-dollars-extra cups. Cute, dontcha think?

Anyway, when we were finally allowed to go find our seats, we came to realize just how bad they were. Reasonably close to the stage but couldn’t see squat. Fortunately, a few people to our right never showed up and the entire row shifted to give everyone the best possible view. Most of us stood the whole time, which was just fine, because…

IT WAS A ROCKIN’ GREAT CONCERT!! 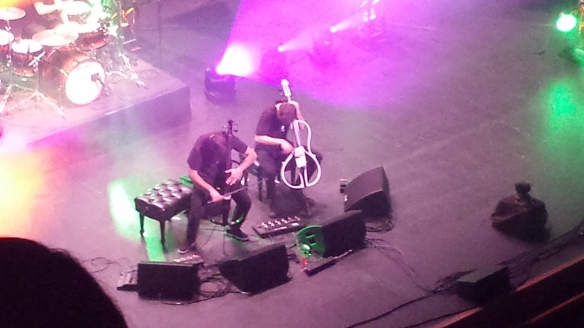 Luka and Stjepan are very talented. Not just in playing their electric cellos, but in entertaining. After playing a couple of songs, Luka announced, “This is not a classical concert. You don’t have to sit still and be quiet. You can cheer. You can hoot and scream. You can stand. You can sing along. You can dance. You can even flirt with Stjepan… {pause}… but just the guys.”

Stjepan, apparently having a reputation with the ladies, crossed his legs and played up the part as everyone laughed. He would later talk about loving the next song because “It is so beautiful. And it’s nice because it’s just… so beautiful.” Which setup nicely for later when he announced, “This next song… It is not beautiful… It is not a very good song… {turning to Luka}…why are we even playing it?”

And when the song was over, he said, “Nice, wasn’t it? It’s nice to be so talented.” (This might sound arrogant but it was affected in such a way that it came across as a joke. In fact, it sounded as if he was talking about Luka since Luka had had the more difficult part.) But then he pointed to Luka and said, “He played pretty well too, don’t you think?”

Continuing over the laughter, “You saw how hard he had to work?” He mimicked the rapid back and forth movement Luka had made with his right hand on the bow. “That’s hard work,” he said. “But he has had lots of practice. Since he was twelve in fact, he’s been practicing that.” The naughty insinuation was clear.

After playing almost an hour just the two of them, they reached their signature songs and the audience started going wild as they played Michael Jackson’s Smooth Criminal followed immediately by Guns N’ Roses’ Welcome to the Jungle. Then their drummer joined them in Thunderstruck and it was a full blown rock n’ roll concert.

Everyone cheered relentlessly when they finally left the stage. Just as I thought they wouldn’t return for an encore, Stjepan walked out and took a seat. He looked up at the crowd and nodded his understanding of what we wanted. And then he proceeded to very slowly play scales. But soon Luka joined him and we were treated to several more hard-hitting songs. Stjepan rolled around on the floor while playing, as if he were some heavy metal guitarist. When a group of kids started clapping, they actually started working it into the music, pausing and pointing to the crowd when it was time to clap. I loved it.

One of the most fun moments for me, however, came later. We quickly ran downstairs when the concert ended so we could be near the front of the autograph line. We were actually fairly successful and got through within twenty minutes of them sitting down.

Quick side note here… I don’t know if it was the size of the venue (and thus the size of the crowd) or if book worms are just bigger on autographs than music lovers. I waited well over an hour, maybe two, to get Diana Gabaldon’s autograph and there were twice as many people behind me as there had been in front. My mother-in-law and sister-in-law experienced about the same for Neil Gaiman. This line was definitely long, but still nothing compared to those authors.

Back to the concert… It took them about a half hour to come out to the table, but when they did, the line moved quickly. The young, well-dressed women in tall spiky heels and short dresses in front of us quickly took off their coats and fluffed their hair. I put mine on so I’d have less to carry and stuffed my wine sippie in my husband’s pocket.

Before I knew it, we were at the table. I placed my tote bag in front of Luka, who signed it and passed it on to their drummer, Dusan. I followed the bag as my husband snuck some pictures and got our CDs signed. Dusan passed the bag to Stjepan, who signed it while continuing to flirt with the young, well-dressed women in tall spiky heels and short dresses in front of us.

“Why don’t you give me your number? I’ll call you tonight,” he purred.

“Are you serious?” the hopeful young lady asked.

“Sure,” he crooned. “Here.” He slid a piece of paper toward her.

“He’s probably just joking,” she said nervously. “But, ok, I will.”

She scribbled her name on the paper. I wondered if she noticed the stash of paper strips in his pocket. Luka jokingly apologized to all the people in the line for Stjepan’s holding up our progress. Then Stjepan glanced up at me, totally uninterested in what he saw, and mumbled a perfunctory (and nonsensical, since I hadn’t spoken to him) “Thank You” before… and here’s the best part… he looked down to find a tote bag in front of him.

So he signed it.

And I gotta say, I know the girl who wrote her name and number down for him feels like she had the time of her life. She probably thinks she had the best experience of anyone there. I’m sure she was giddy and floating on cloud nine as she left. I sincerely hope her friend was driving.

But, being the 40+ year-old dismissed woman after her who got a double signature out of the guy too busy flirting to notice what he was doing? Hah! I got the last laugh and enjoyed every minute of it. I’m too old to catch a rock star’s attention. But I’ve got all of that attention I need from the guy I cuddle up with every night. I wonder if anyone else got quite as unique a souvenir as I did.

don of all trades

a Heart on the matter

words from my heart

And now and then an elephant all white.
Rockstar Dinosaur Pirate Princess
Exile on Pain Street

Straddling the Hudson River. One foot in NYC, the other in suburban New Jersey.

It's all about the backstory

My No Rules Journal

...because parenting is a dirty rotten job and laughing about it is sometimes the only thing that helps.

something to honk about

Stuff That Needs To Be Said

Some of these thoughts may make sense. But don't count on it.

Living: All Day Every Day: Then Chattering About It

Thoughts and tales from a writer in progress.

A Constant State of Hunger

Hungry has nothing to do with it...

Putting the experiences of Laura Ingalls Wilder (& an historian who interprets her) in context, one visit at a time...

We Are Not 'The Other'
My Site
The Stuff They Won't Include in Any Tourist Guide: The Real England

The Real England is a concise, direct, and not-so-gentle window into the depths of the leftovers of the world’s once greatest empire. It is told from the perspective of one lone (or not so lone) long term visitor. It informs one of the dregs of the country and helps to explain quaint British oddities such as the crack addicted chav.

A bucket list blog: exploring happiness, growth, and the world.

More than just another wiseass

Life in the Boomer Lane

a bright girl with dark influences.

Glorious Results Of A Misspent Youth

Saving The World From Stupidity...One Blog At A Time