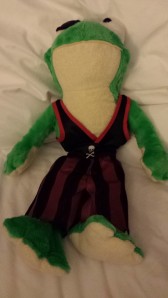 Meet Mr. Chubby Butt. He’s a pirate. And a frog. And frogs do not have butts. Or at least he doesn’t. Or if you call what he has a butt, it’s certainly not chubby.

Daryl read a lot of books this year and earned a lot of AR points at school for them. More points than anyone else in his elementary school including fifth graders, in fact. Nearly twice as many as the second place fourth grader.

He’s following in the footsteps of his sister, who had similar accomplishments. Their success in this arena has three major components:

So while many of the other kids love to read or have a higher reading level or are competitive in some ways, none of them seem to have that same three-way toxic mix that mine have.

This causes the PTA some headache.  They have an “AR store” where kids can redeem their points for various little items.  Their budget and point values on items anticipate most kids getting less than 100 points, with the standouts earning around 200 to 300.

When Jane had well over 600 points halfway through her fourth grade year, they asked her to name her price.  She asked for, and received, a Kindle.  Later that year or the next, she got an Amazon gift card.

Her brother, of course, was not content to reside in her shadow.  He gave the winning fifth grader a run for her money while still in third grade.  In fourth, he tackled big-point books including Ender’s Game, Dune, and all the Harry Potter books.  And since he wanted to maximize his return, he saved all his points to spend at the end of the year.  Once again, the PTA was faced with a kid who would break the bank.

They offered him a “VIP Pass” to an upcoming event, a turn in the “money box”, or a Build-A-Bear animal.  He jumped on the latter but wanted to know how many points it would cost.  He also mentioned that he’d like an Amazon gift card.

The teacher and I went back and forth for awhile with her trying to tell me that he could have whatever he wanted, he just needed to name it.  And me trying to tell her that he didn’t fully know what he wanted.  He wanted to analyze his options once point values were assigned.

They finally set point values.  And he went shopping.  He got various little knickknacks for himself and his little brother.  He got a nice gift card to Wal-Mart.  And he got to build an animal.

He chose a frog with no backside and named him Mr. Chubby Butt.  And then asked me if I could help him figure out how to secure the belt since it was too big for such a skinny beast. A-hem.  That’s because he has no butt!  *sigh*

don of all trades

a Heart on the matter

words from my heart

And now and then an elephant all white.
Rockstar Dinosaur Pirate Princess
Exile on Pain Street

Straddling the Hudson River. One foot in NYC, the other in suburban New Jersey.

It's all about the backstory

My No Rules Journal

...because parenting is a dirty rotten job and laughing about it is sometimes the only thing that helps.

something to honk about

Stuff That Needs To Be Said

Some of these thoughts may make sense. But don't count on it.

Living: All Day Every Day: Then Chattering About It

Thoughts and tales from a writer in progress.

A Constant State of Hunger

Hungry has nothing to do with it...

Putting the experiences of Laura Ingalls Wilder (& an historian who interprets her) in context, one visit at a time...

We Are Not 'The Other'
My Site
The Stuff They Won't Include in Any Tourist Guide: The Real England

The Real England is a concise, direct, and not-so-gentle window into the depths of the leftovers of the world’s once greatest empire. It is told from the perspective of one lone (or not so lone) long term visitor. It informs one of the dregs of the country and helps to explain quaint British oddities such as the crack addicted chav.

A bucket list blog: exploring happiness, growth, and the world.

More than just another wiseass

Life in the Boomer Lane

a bright girl with dark influences.

Glorious Results Of A Misspent Youth

Saving The World From Stupidity...One Blog At A Time